The Owners Association was started with the construction of the first house in 2012. It takes more than one house to be an association especially with 85 lots available to have houses built upon them. The original owner was the only house in the community and subjected to three break-ins. The community had no streetlights, so it was quite easy for things to happen.

A nationally known home builder acquired the rights to complete the construction of the planned eighty-six homes from the original builder who had to file for bankruptcy. After selling the model home, the developer left the community. As the community was being developed, each new homeowner was made a member of the owner’s association and informed of the association’s bylaws and covenants. The association was lying dormant. The temporary association that was formed when the builder took over the land did not do anything for the owners. They did not even pay the electric bill for the light to the sign or the two entry streetlights that had remained dark for years. 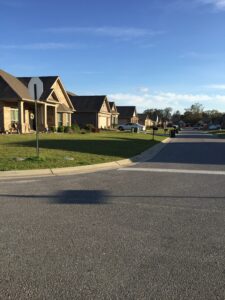 The community had no amenities and because it was nestled back in an area with a lot of wild growth, it was very dark at night. The darkness was good for people who did not belong in the community. Since it was so dark, the community vacant lots prior to homes being built were used as trash dumps. All kinds of odd furniture that was dropped off, i.e., old sofas, old televisions, even a recliner that ended up in a tree. Not to mention the regular trash that was dropped off such as lawn mowers, kid’s wagons, underwear, socks and regular garbage. The owners did not appreciate the trash and knew something had to be done.

A few owners got together to research the transfer of the owner’s association to the owners from the developer. In 2017, the owner’s held its first members meeting to elect the initial officers and Board. After election, the officers and Board met to begin the process of organizing the association. The Board decided to investigate hiring a management company to take care of the administration of the association. Since the Board members were already all busy with their own jobs and families, they did not have the time to issue the invoices for the assessments, organize their meetings and other items.

The Board contacted several Homeowner management companies. For the size of the community which included eighty-six homes, the proposals received from the companies would have meant the owners would need to pay $500-600 a year as their assessment just for the management company. The community needed streetlights, its sign fixed, and the irrigation system at the entry updated. This would have increased the assessment making it even higher. The Board agreed that they could not expect the owners to pay such a high assessment. The Board contacted BF Virtual Associates, LLC.

BF Virtual Associates, LLC specializes in smaller communities of less than 150 homes. They submitted a proposal that allowed the Board to select the package of services that met their needs at a reasonable rate that meant the annual assessment could remain manageable for the members. Upon awarding of the management contract, BF Virtual Associates organized the Board and annual member meetings by drafting and distribution of agendas and minutes, facilitated the meetings, issued the annual assessments, developed the annual budget, and processed the assessment payments and payment of bills for the association.

If your community association is tired of working with impersonal, large organizations, contact BF Virtual Associates, LLC for a free consultation and quote.